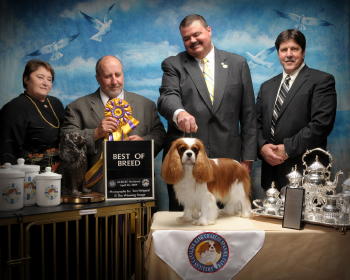 The World of Dog Shows

Showing dogs is a great sport where the thrill of competition is combined with the joy of seeing beautiful dogs. Dog shows are one of many types of AKC dog events in which AKC-registered dogs can compete. These events, which draw over three million entries annually, include dog shows and tests of instinct and trainability, such as obedience trials, Canine Good Citizen tests, field trials, agility trials, lure coursing, rally, hunting tests, herding trials, tracking tests, coonhound and earthdog events.

Dog shows (conformation events) are intended to evaluate breeding stock. The size of these events ranges from large all-breed shows, with over 3,000 dogs entered, to small local specialty club shows, featuring a specific breed. The dog's conformation (overall appearance and structure), an indication of the dog's ability to produce quality puppies, is judged.

There are three types of conformation dog shows:

All-breed shows offer competitions for over 150 breeds and varieties of dogs recognized by the AKC. All-breed shows are the type often shown on television

Group shows are limited to dogs belonging to one of the seven groups. For example, the Potomac Hound Group show features only breeds belonging to the Hound group.

Which Dogs May Participate

To be eligible to compete, a dog must:

Spayed or neutered dogs are not eligible to compete in conformation classes at a dog show, because the purpose of a dog show is to evaluate breeding stock.

The Role of the Judge

Judges examine the dogs, then give awards according to how closely each dog compares to the judge's mental image of the "perfect" dog described in the breed's official standard.

The standard describes the characteristics that allow the breed to perform the function for which it was bred. These standards include specifications for structure, temperament and movement.

The official written standard for each breed is maintained by the breed's national club and is included in the The Complete Dog Book published by the AKC.

The judges are experts on the breeds they are judging. They examine ("go over") each dog with their hands to see if the teeth, muscles, bones and coat texture conform to the breed's standard. They view each dog in profile for overall balance, and watch each dog gait ("move") to see how all of those features fit together in action.

How a Dog Show Works

Each dog presented to a judge is exhibited ("handled") by its owner, breeder or a hired professional. The role of a handler is similar to that of a jockey who rides a horse around the track and, hopefully, into the winner's circle.

Most dogs in competition at conformation shows are competing for points toward their AKC championships. It takes fifteen points, including two majors (wins of three, four or five points) awarded by at least three different judges, to become an American Kennel Club "Champion of Record."

Males and females compete separately within their respective breeds, in seven regular classes. The following classes are offered, and are divided by sex:

Puppy - For dogs between six and twelve months of age, that are not yet champions (optional class).

Twelve-To-Eighteen Months - For dogs twelve to eighteen months of age, that are not yet champions (optional class).

Novice - For dogs six months of age and over, which have not, prior to the date of closing of entries, won three first prizes in the Novice Class, a first prize in Bred-by-Exhibitor, American-bred, or Open Classes, nor one or more points toward their championship (optional class).

Amateur-Owner-Handler – For dogs that are at least six months of age that are not champions. Dogs must be handled in the class by the registered owner of the dog and is limited to exhibitors who have not, at any point in time, been a professional dog handler, AKC approved conformation judge, or employed as an assistant to a professional handler (effective January 1, 2009) (optional class).

Bred By Exhibitor - For dogs that are exhibited by their owner and breeder, that are not yet champions (optional class).

Open - For any dog of the breed, at least 6 months of age (mandatory class).

After these classes are judged, all the dogs that won first place in a class compete again to see who is the best of the winning dogs. Males and females are judged separately. Only the best male (Winners Dog) and the best female (Winners Bitch) receive championship points. The Winners Dog and Winners Bitch then compete with the champions for the Best of Breed award. At the end of the Best of Breed Competition, three awards are usually given:

Best of Breed - the dog judged as the best in its breed category.

Best of Winners - the dog judged as the better of the Winners Dog and Winners Bitch.

Best of Opposite Sex - the best dog that is the opposite sex to the Best of Breed winner.

The Road to Best in Show

Dog shows are a process of elimination, with one dog being named Best in Show at the end of the show.

Only the Best of Breed winners advance to compete in the Group competitions. Each AKC-recognized breed falls into one of seven group classifications. The seven groups are Sporting, Hound, Working, Terrier, Toy, Non-Sporting and Herding. Four placements are awarded in each group, but only the first-place winner advances to the Best In Show competition.

The Seven Groups in All-Breed Shows

Sporting - These dogs were bred to hunt game birds both on land and in the water. The breeds in this group include Pointers, Retrievers, Setters and Spaniels.

Hounds - These breeds were bred for hunting other game by sight or scent. These breeds include such dogs as Beagles, Bassets, Dachshunds and Greyhounds.

Working - These dogs were bred to pull carts, guard property and perform search and rescue services. Among the breeds in this group are the Akita, Boxer, Doberman Pinscher and St. Bernard.

Terrier - This group includes breeds such as the Airedale, Cairn Terrier and Scottish Terrier. Terriers were bred to rid property of vermin such as rats.

Toy - These dogs were bred to be household companions. This group includes little dogs such as the CAVALIER, Chihuahua, Maltese, Pomeranian and Pug.

Non-Sporting - This diverse group includes the Chow Chow, Bulldog, Dalmatian and Poodle. These dogs vary in size and function, and many are considered companion dogs.

Herding - These dogs were bred to help shepherds and ranchers herd their livestock. The Briard, Collie, German Shepherd Dog and Old English Sheepdog are some of the breeds in this group.

Finally, the seven group winners are brought into the ring where they compete for Best In Show, the highest award at a dog show.

Each dog that receives an award is given a ribbon by the judge. The color of the ribbon indicates the type of award the dog has won.

Blue - awarded for first place in any regular class. Also awarded to the winner of each group competition, usually in the form of a "rosette".

Purple - awarded to the winners of the Winners Dog and Winners Bitch classes. Since these are the classes in which championship points are earned, these ribbons are highly coveted.

Purple and White - awarded to the Reserve Winners; that is, the runners-up to the winner of the Winners Dog and Winners Bitch classes.

Blue and White - awarded to the dog that wins Best of Winners; that is, the better of the Winners Dog and Winners Bitch winners.

Purple and Gold - awarded to the dog judged "Best of Breed" in each breed competition. This is highly coveted because it allows advancement to the Group competition.

Red and White - awarded to the Best of Opposite Sex. This means the best dog of the breed that is the opposite sex of the Best of Breed winner.

Red, White and Blue - only one of these is awarded, at the end of each show. It is given to the ultimate award winner, the Best In Show.

How Do I Get Started Showing My Dog?

The best place to start is by joining a local kennel club, whether an all-breed kennel club or a breed-specific specialty club. A listing of clubs by state can be found on our Club Search page or through our customer service department by calling (919) 233-9767.

Handling your dog is an exceptional and enjoyable experience. From the grooming table to the show ring, you and your dog will develop a bond. While training classes offer the best hands-on way to practice for the show ring, attending shows and observing your breed is also a great way to gain understanding of what judges and other competitors do.

If you do not wish to handle your dog yourself, or have a friend or family member do it, you may contact a professional handler who charges a fee for showing your dog.

You're on your way! You are entering a sport that will bring many hours of enjoyment and education to every member of your family. You will make many friends in the sport, and will enjoy your dog and your new hobby for many years to come.

The AKC offers children 9 to 18 years of age the opportunity to compete with others their own age at various AKC events. Juniors competing in conformation events are judged on how they present their dogs.

Tips for the First-Time Exhibitor

Tips for the First-Time Spectator

No thoughts on “Conformation”