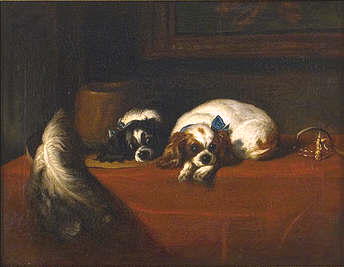 The Cavalier King Charles spaniel is an old breed and yet, it is also a comparatively new breed. The breed as we know it is less than 100 years old.

In William Secord's book Dog Painting, the picture painted in 1440, by Antonio Pisano, The Vision of St. Eustace, depicts a group of animals including a pair of small spaniels which Secord notes are "no doubt ancestors of our present day King Charles Spaniels. " These small Spaniels with their flat heads, high set ears, almond shaped eyes and rather pointed noses are also to be seen in paintings by Rembrandt, Van Dyck, Gainsborough and others. Often referred to as the Comforter Spaniel, they were very much in favor with the aristocracy during Tudor times when the ladies of the court found them very useful not only as companions and confidants but also as hot-water bottles and flea catchers.

By the mid 1800's,the breed had been altered to a dog with a domed skull, long low-set ears, a very short muzzle with a laid back nose and undershot jaw and large round eyes. A number of Lanseer paintings document the changes and by 1900, the dog bearing the name King Charles had been transformed to what we know as the English Toy Spaniel. 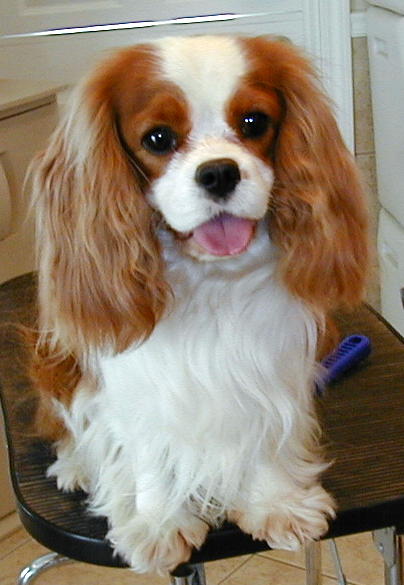 In the mid-1920's, Roswell Eldgridge, an American, went to England to try to find the old type "nosey" spaniels. He was very disappointed that he did not find the dog he had seen depicted in old paintings. For five years he offered a prize of 25 pounds at Crufts to the persons who presented the dog and bitch "as shown in the picture of King Charles II's time, long face, no stop, flat skull, not inclined to be domed and with the spot in the center of the skull." In 1927, a dog named Ann's Son was the winner of the 25 pound prize and in 1928, a standard was drawn up using Ann's Son as the model.

The revival of the breed did not go so far as to return to the small eyes and snippy muzzle opting instead for a softer gentler look. Purists would have us believe that long nosed throwbacks from English Toy Spaniels were the only dogs used in the recreation of the breed. Breed lore suggests, however, that various Cocker breeds, Papillons and perhaps even the Welsh Springer were used to recapture the desired traits.

World War II interrupted the development of the breed when travel to the very few stud dogs available was near to impossible. This led to some very intense inbreeding by some breeders which we might frown on today but which saved this emerging breed at that time.

The first Cavaliers were sent to America in 1952, and in 1956 a club was formed. Soon after they sought AKC recognition but because of the small numbers they were relegated to the Miscellaneous class. In 1993, The American Cavalier King Charles spaniel Club was formed and on January 1, 1996 the breed became the 140th AKC recognized breed.

No thoughts on “A Brief Breed History”